About Us  /  A Note from our Benefactor

About Us
Current Exhibition 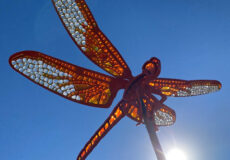 A Note from our Benefactor A Note from our Benefactor, Roy Reiman (pronounced rye-men)

– TRUTHFULLY, when the idea first came to mind of having an attractive garden at the entrance to the Iowa State University campus, the concept wasn’t anything as grand and sizeable as it eventually became.

The idea came to me during a break in a meeting at the Scheman Building. I was standing on the balcony there with then President Martin Jischke, and complained to him that the view out to the south in that open expanse was rather “bland”, and that it surely could be helped if some flower beds and ornamental plants could be added to the landscape.

Lesson learned: Never complain to a president! A short time later he requested a meeting to show me a “garden design plan” the landscape staff had put together. And that was the start of Reiman Gardens.

Both my wife Bobbi and I were pleased and fascinated by these Gardens’ potential from the very beginning, but we had no idea they’d eventually become a 17-acre site that’s become an Iowa “must-see” tourist attraction and an exceptional resource for all ISU students.

Best of all, we like the colorful “introduction” these gardens give students and parents each time they visit the campus. What better way could there be to say, “Welcome!”?

“Let these gardens be a special place for students to come to quiet their minds, collect their thoughts, and find their futures.

“Let this place also serve as a tribute to the teachers who nurture new seedlings each year and bring students’ budding talents to full bloom – proving again that education bears living seeds that beautify the world.”

About Roy and Bobbi Reiman

Roy Reiman grew up on a rented farm near Auburn, Iowa, where he attended a small rural high school with just 63 students and only 11 in his class.

His high school English teacher spotted his talent for writing, and was determined to have him become her first college journalism student. Upon graduation, he enrolled at Iowa State, but couldn’t begin until the January quarter, first needing to earn enough to cover the tuition.

Banking on the work ethic he’d developed on the farm, he paid all of his college expenses through various summer jobs—including operating a bulldozer on a road construction crew—as well as jobs on campus.  He worked at the college print shop, sold advertising, wrote news releases, reported market news on Radio WOI, and served as a spotter for the play-by-play announcer at Iowa State football games.

He also waited tables at a sorority house and sold cookware, once tallying the highest sales in the Midwest for a one-week period.  Still struggling to cover costs as a sophomore, he was encouraged by his counselor to take a senior course in “Magazine Freelance Writing”.  The goal set for the class was to sell three articles to receive 3 hours of “A” credit.

But once Roy found he could make good money with his mind instead of his back, it wasn’t the grade but the payments that motivated him. By the end of the quarter he’d sold 27 articles to various publications and set a record that still stands today.

He graduated from Iowa State University in 1957 with a degree in Agricultural Journalism. Having completed the ROTC program while in college, he went directly into military service as Second Lieutenant at Fort Sill, Oklahoma.

After service his first job was with an ad agency in Kansas City.  After a short term there, he was pursued by Capper’s Farmer magazine in Topeka, Kansas. That publication had bought a number of his freelance articles and liked his writing style.  Just 2 years after joining the staff, he became the Managing Editor at age 23.

Roy says the best part of his job in Topeka is that’s where he met Bobbi, who was the executive secretary to the Editor.  Even before they married, he took her for a tour of the Iowa State campus, and to this day she refers to Iowa State as “Roy’s Rome”.

After moving on to Milwaukee and working several years for a publishing firm there, he left to start his own publishing company, setting up a small office in the basement of his home. That was the beginning of Reiman Publications, which eventually grew to be the largest subscription-supported publishing firm in the United States with over 16 million paid subscribers.

It led to the launch of 14 national magazines—Country, Reminisce, Farm & Ranch Living, etc.  Among them was Taste of Home magazine, which soon became the country’s leading food magazine with over 5.3 million paid subscribers, making it the sixth largest magazine in America.

What made all 14 of these magazines particularly unique in that none of them accepted advertising.  All of them were supported solely by subscriptions. Experts in the publishing industry said that could never be done, but Roy proved the naysayers wrong, big-time.

By 2004, more than 16.3 million people subscribed to his magazines. And by 2008, one out of every 8 homes in America received at least one of the Reiman magazines.

Roy sold the company in 1998 but stayed on board as CEO to continue directing its growth.  In 2008 he retired, took a sabbatical during which he wrote a book about his life’s experiences, traveled around the world, became involved in various non-profit boards and worked on his golf handicap.

But as he puts it, “I totally flunked retirement”, and eventually started two new magazines–one for his home state, named Our Iowa, in 2008, and the second in January of 2013, named Our Wisconsin, for his adopted state.

Along the way, the couple started “giving back” to Iowa State, and is best known for providing funds to establish Reiman Gardens, a 17-acre botanical center located at the south entrance to the campus.

The Reimans have also supported business and journalism programs and scholarships, including entrepreneurship lectures in the College of Business, and they were the main donors for the Iowa State Alumni Center.  In December of 2013, they were lead donors in the project that will enclose the south end of Jack Trice Stadium.

The family’s foundation has actively funded programs in other areas of the country dealing with health, education, and community improvements, particularly emphasizing the later in their hometowns—Auburn, Iowa and Netawaka, Kansas.

They regularly return to the Iowa State campus, since Roy says it’s still like “coming home”.  Bobbi enjoys those trips just as much, and was presented an Honorary Alumna Award from Iowa State in 2006. “I was thrilled!” she says.

The campus is so meaningful to them, she says, because, “It’s where Roy discovered talents he didn’t know he had.  Everything he’s done keeps coming back to Iowa State.  I found when I married him I’d married Iowa State, too, and have learned to love the place just as much as he does”.

We also thank all of our donors, all of whom have made a difference, and brought something special to our Gardens. Thank you for becoming a member of the Reiman Gardens family who continue to provide critical support for the Gardens. Join our family of donors today.